The VCL encapsulates the communication between all components and is responsible to deliver all messages that need to be exchanged. It provides funtions to determine which message has to be received and wrapps Sensor World Messages (basic message type used in the simulation) into a format for sending via the network. The VCL should provide high performance to allow multiple working components like sensors or phenomenons. It simulates the conditions that exist in reality by using the CommunicationSimulation.

Main components of the simulation The interface to the virtual communication layer is a Common Connector which provides methods for receiving and sending messages. Important tasks for the Common Connectors are: Every component in the simulation possesses a link to an associated common connector through its specific connector, which acts as a bridge between the component itself and the communication system.

For the message transport the virtual communication layer relies on the messaging system MantaRay. MantaRay is a implementation of JMS (Java Message Service - http://java.sun.com/products/jms/) and will be used to make messaging traffic possible in SensorWorld. JMS provides two different communication model: During the work in - phase we did some performance tests with MantaRay. The Result (german only): MantaRayPerfomanceTests and shows that MantaRay offers a good performance. However it is imaginable to change the messaging system for future scenarios. Since the main functionality of the messaging is encapsulated in the Common Connector class it is easily possible to exchange the system. 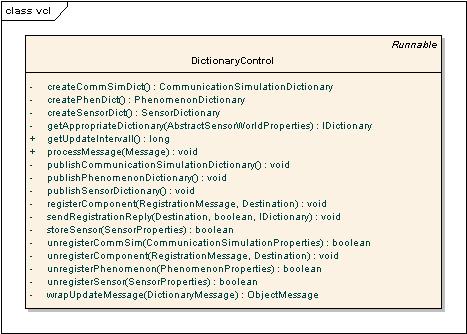 A short description of UseCases within the virtual communication layer, contains images an detailed descriptions.
Tags: , view all tags