The Geonetcast Data Manager is a software application for Windows / Linux written in Java that - in short – examines computer files, and transfers them to a proper location,
based on filename-patterns. It was developed by ITC (http://www.itc.nl) and is part of the ILWIS Geonetcast Toolbox.

Detailed instructions/explanations can be found in the offical documentation " FIRST STEPS, CONFIGURING THE GEONETCAST TOOLBOX UNDER ILWIS 3.6 " by Ben Maathuis, Bas Retsios & Martin Schouwenburg ITC-Enschede. In the following section we will give a brief overview of the basic functions (based on the tutorial).

The ProductAdministrator has to creat the file-processing rules. This has initially to be done by editing a text-file (the configuration file that is used by the Geonetcast Data Manager). The configuration file used by IFGI can accessed here: GeonetcastDataManager-IfGI.txt At a later stage, the rules are fine-tuned in the user-interface of the Geonetcast Data Manager. This was done to keep the user-interface simple and understandable. For example, file patterns or expected frequency of a category of files must be changed in the configuration file, using a text-editor. However, is changed in the user-interface, because it is considered a "last-minute" change: the administrator may frequently change his mind about this. It is recommendable to activate "dated folders" (3), since otherwise over time the number of files in a single folder is rises rapidly. This does file access and folder maintaince really slow down. The user-interface of the Geonetcast Data Manager adapts itself to the rules that are defined. Rules are organized it “groups” and “items”. Each group becomes a tab (1 in figure), andeach item becomes a box within a tab. Few rules will make a small user interface(a small window), and many rules will make a large one. 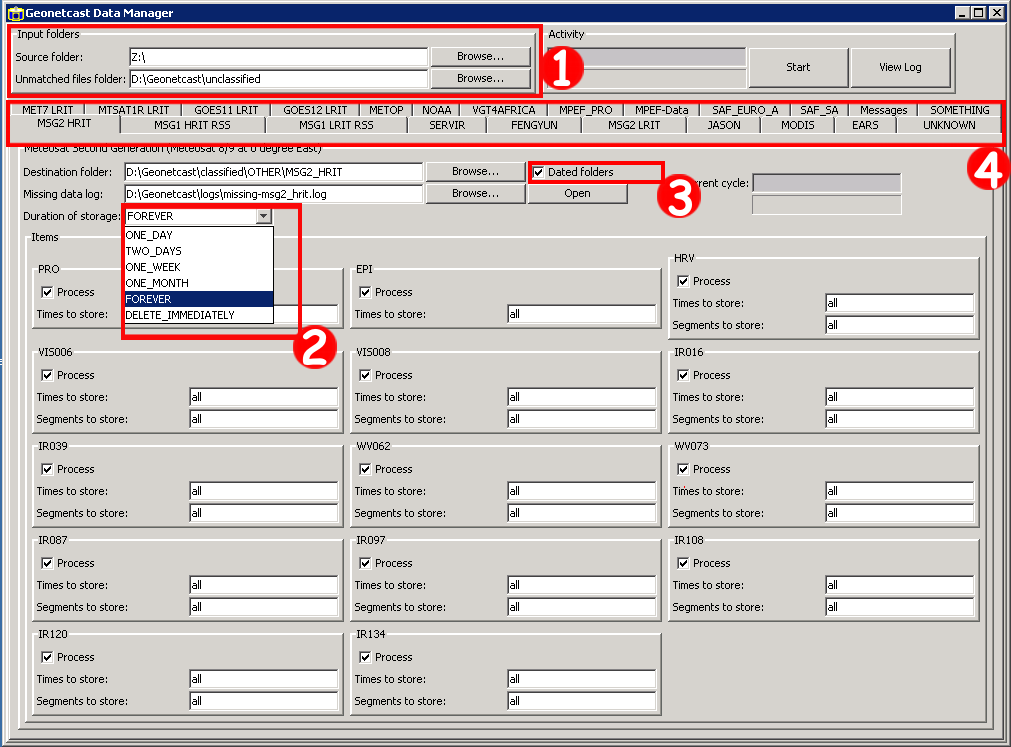 Note: The destination folders have have to exist, before starting the processing. A emtpy folder structure used by IFGI can downloaded here as a zip-file: geonetcast_folderstructure.zip -- JohannesTrame - 2010-09-23
Tags: , view all tags