An instance of the sensor described here comes with the SPS distribution. The sensor only simulates behaviour and parameters to test the SPS installation and configuration. For testing you can use the OWS5 TEAM engine. Note: the design of the CITE plugin was reused within the CITE testing in OWS-9 when testing the 52°North SPS 2.0 reference implementation. The interface of the sensor is given by its list of taskable parameters and its SensorML document. Refer to the SensorConfiguration topic to get more information to configure the sensor and how to request the SPS when installing and registering the sensor at a running SPS.

For being able to test an SPS, first of all you need to register some sensors. Then you are able to test basic operations like GetCapabilities. However, the SPS is a stateful service and thus you need to define the interface (taskable parameters) and behavior of the registered sensors. On this page we describe the usecase of the sensor, what requests and behaviour will be tested in reference to the CITE testing and what not. Furthermore problems and issues concerning the SPS testing are discussed here. The sensor plugin, its parameters and how it behaves in detail is described on this page.

Some Words about testing

The following subsections hopefully clarify what is tested and what not (and why).

What could be tested with the sensor?

What is not intended to be tested – at the moment

What cannot be tested

The following subsections describe the sensor how it behaves, what parameters it needs to be tasked, etc.

The idea of the sensor is that it can be tasked to take measurements at two consecutive locations before having to return to the base station for loading/changing batteries. The following diagram exemplifies this behavior. 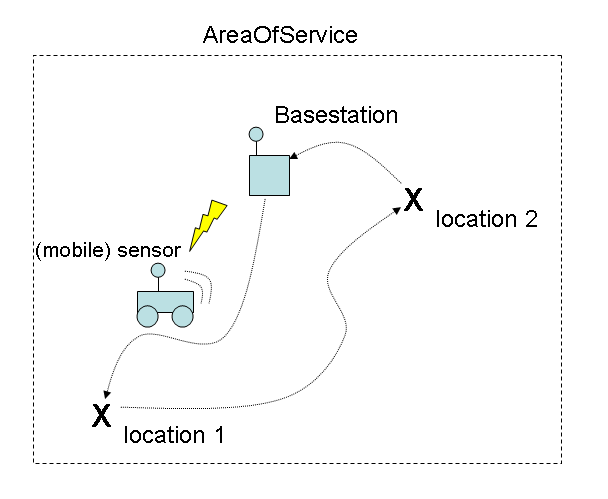 The use case should be as simple as possible but also be complex enough so that as many test cases can be supported as possible. Look at this page for a more detailed view of the sensor plugin.

We should try to get as much of the simple SweCommon types in here as possible. We should also try to provide constraints on some of the parameters and provide at least one parameter for each combination of the 'use' and 'updateable' attributes of an sps:InputDescriptor