ILWIS Mobile will be a mobile application for android making use of the ILWIS framework. More information can be find in the blog post.

I, the student that is working on this project, am Bouke Pieter Ottow. I study Geo-Information Science at the university of wageningen and I have a bachelor in Civil Engineering. Until now I worked on several small projects on developing android apps with a geospatial focus. More about me can be found on my LinkedIn profile. My mentors are Rob Lemmens, Martin Schouwenburg, Henning Bredel and Bas Retsios.

The code of the app can be found on GitHub.

The update location button at the record observation tab seems to be not working.
There might be a little shift in the markers maybe due to the size of the image.
The upload all button doesn't work always, especially not when connection is slow.

The QT Location module is not available anymore in QT 5. This makes it harder to make a nice map. I solve this to just show an image and program the markers and actions myself.

1. Template file is cut in two and added to the list (from dowload folder for now) The template file looks (for example) like this: 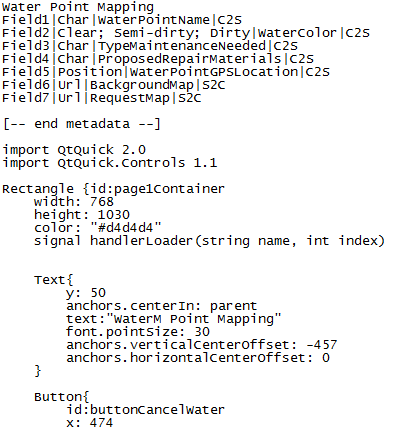 The first metadata part has 4 fields per input: 1) generic field name.This field name is used to couple UI and information in request/responses in a way that is generic. The field id has a different meaning in each of contexts that is used.
2) Datatype of the field. Either a single value ( e.g. char or position) or a set of values which can be shown in a combox or listview. The set items are always seperated by semi-colons
3) A more descriptive id for the field. Not striclty needed but it makes interpretation of the template line bit easier
4) Marker if the field is read-only ( seen from the client side) or readwrite, meaning that data should also be written back to the server. S2C = readonly, C2S = read/write The second part is qml code for the viewing of the template. At the moment this file is downloaded in the app from the download folder of the android mobile (because the server is not yet online), then cut in two and the QML part stored as a QML file. This file is added to a list, so the template can be selected for an observation. 2. Template is a little bit nicer with qt quick controls Some qt quick controls are used which makes it easier to make a standard field like a text input or comobox look pretty. For example the Water Point Mapping template looks like this: 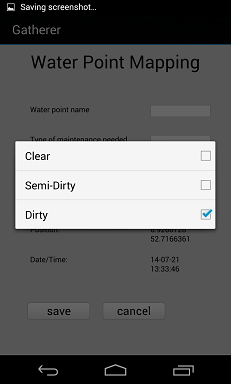 with the selection of the water color popping up when tapped. 3. GPS position and date/time are added When the template is opened the gps position and data/time are automatically added. When the gps is turned off it uses the course location based on the telephone signals.

I programmed in QML a (functional) basis for the app. This is the opening screen with a main menu: 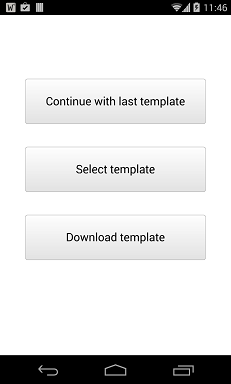 It gives three options about templates. With a template an observation can be recorded. The first one continues with the last used template, the second gives the option to select a template from the ones that are already in the app. The last option gives the function to download a new template from a server. For now only the second option works (yet). It gives this screen: 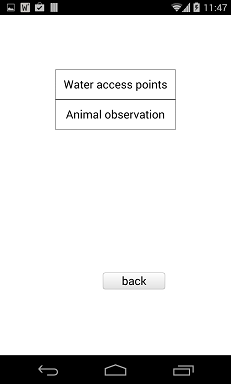 It has a list with the local available templates, in this case 'Water access points' and 'Animal observation'. This list is populated from c++, now still static but coming week probably dynamically regarding the dowloaded files. By selecting one item of the list the record observation screen appears: 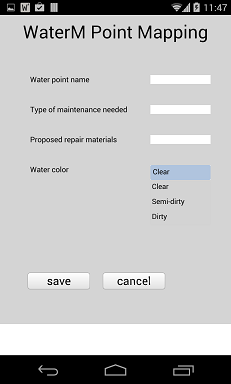 This is one of the 'templates'. It has three input fields for normal strings and one dropdownmenu to choose of an enumerator.

The problem I am struggeling with today is to load a QML file (from QML) that is downloaded from outside the app, so it is not in the qrc file.

I have been working on a good design of the different windows needed for this app. QML doesn't provide an easy method but the method described here seems handy. I am trying to implement this method and the first screen is loaded but the second after the button is clicked doesn't work yet. Looks now that it isn't working on desktop but it is on android. To be continued in next update.

I had difficulties making the connection of QML with c++. So for example, handling the pressing of a button in c++, but which is made in QML.

Start of the project.

Start of the project.

Next tasks (for 8 hours)