In this project, I will be developing classes and methods that are specifically for trajectory analysis in the R language. The methods will be building on classes in spacetime package, and will include computation of trajectory attributes, trajectory selection, trajectory aggregation (by time/space/id), sampling, visualization, and interpolation. I will also explore other common analysis methods for trajectory analysis. In addition, I intend to develop a method that can convert generic trajectory data in various formats into STTDF object in the spacetime package. The project is being managed at R-Forge.org. The code can be accessed from this link. For those of you who want to test the package on your R, you may get anonymous subversion access from: svn checkout svn://r-forge.r-project.org/svnroot/spacetime/. 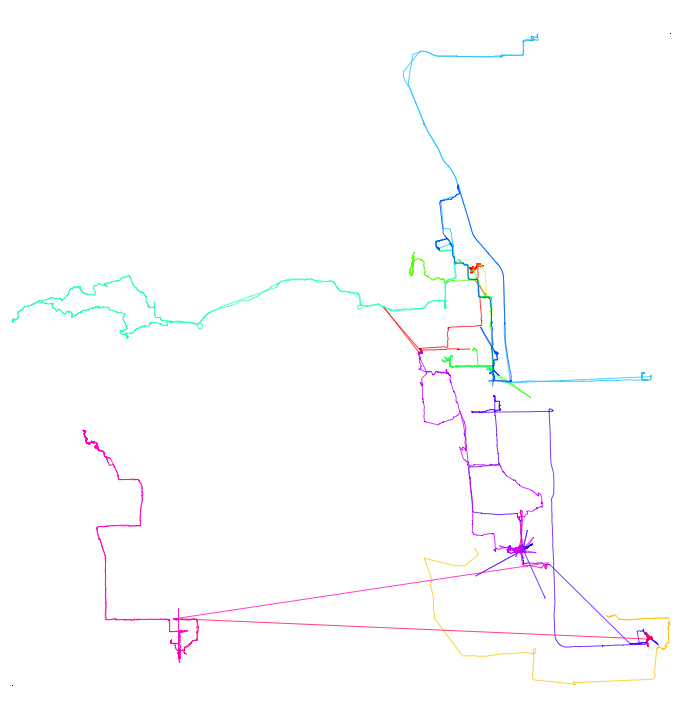 Problems:
- Need to seek another solution to link the data in the data slot of the STTDF object to the spatial points and time stamps of the STTDF object. Currently, the linkage is made by indexing and counting;
- The plot function cannot be properly loaded when load the trajectories package. Need to manually run the plot.R to make the plot() function work for STTDF objects.
Tasks for next week:
- Expand the aggregate() function to support data aggregation on different time units;
- Write demo based on the EnviroCar dataset;
- Impletement keep working on the sample() and merge() functions.
Week 12 - Sept. 9, 2013 Status:
- Updated the content in the /tests folder such that all the demo scripts are being tested when check&build the package;
- Moved short demos to the example section of the Rd files;
- Made a new sample dataset from GeoLife dataset as part of the pacakge;
- Modified the read.R to help user test the package with a larger portion of dataset from GeoLife. Problems:
- None.
Tasks for next week:
- Create vignette-style of the demos with figures for the functions developed so far;
- Keep working on incompeted functions.
Week 13 - Sept. 16, 2013 Status:
- Bug fixed for crop() function that caused error when only a single attribute is available;
- Adapted all testing scripts into the tests folder with expected outcomes generated;
- Created figures for vignettes ( link at r-forge.org);
- Revised the geolife_reader()function such that users can test the package with part/full set of geolife data. Problems:
- New bug found in the crop() function. Trajectories missing when do the crop.
Tasks for next week:
- Write vignette and wrap-up;
- Fix the bug in crop() function.
Week 14 - Sept. 23, 2013 Status:
- Bug fixed for crop() function that only trajectories that entirely falls into the polygon are selected;
- Directory and warning message cleaning;
- Vignette updated;
- Made the final post;
- Namespace updated;.
Problems:
- None
Tasks for future:
- Working on the selection() function;
- Plot() function that visualizes the attribute of the trajectories;
- etc.

My name is Jinlong Yang. I am a second-year master student at Penn State Geography. My research interests center on Spatial Cognition and GeoVisualization.

Explanation: The current handling of trajectory data in R is scattered, partial, and strongly linked to particular domains (mainly ecology); generic data structures and methods (see SpatioTemporal task view on CRAN). This GSoC project will implement and/or improve generic classes, methods and tools for handling and analyzing large-scale trajectory data with R. Expected results: Classes and methods for handling trajectories in R, building on the classes for handling spatio-temporal data in R in package spacetime. Low-level manipulation will involve selection (by individual, by trip), aggregation (to a lower spatial and/or temporal resolution), sampling, simple (linear) interpolation and visualisation (by animation and by conditioning plots). Analysis methods will include computation of attributes (speed, direction); computing distances between trajectories; simple statistical methods for interpolation such as biased random walk. Code should be integrated in spacetime or depend on it; package should be ready for submission to CRAN. Community and Code License: Geostatistics and Geoprocessing, GPL 2.0