The project follows and agile software development method, so we do not have a fixed set of tasks. We use Scrum (to a certain degree) with one week long sprints and telcos on Mondays and Fridays.

We found two bugs in the system:

This week we concentrated on the data backend , we implemented the following : Results Results for Next weeks All of the commits of this week were implemented under the solr branch of the github repo and can be found at : https://github.com/Moh-Yakoub/OpenSensorSearch/commits/solr

In this week we completed the indexing and storing of all of the metadata of sensors , to be indexed in apache solr , we added the following fields For each of the previous fields , there were a unit test , to index ,store retrieve and test the autocompletion. To solve the problem of lack of sensors we generated sensor by two ways Challenges TODOs For the next week

The results can be found here Challenges Tasks for next weeks

In this week the work was included in the following themes 1) The harvesting mechanism 2) The Sandbox of harvesting To protect the server from the scripts , sandboxing using class shutters of rhino allow to restrict the classes that a script can access , a class was implemented for that functionality and allowed the access only to the Insertion DAO. 3) Harvest scheduling The scheduling depend on using quartz scheduler which lets the server harvest scripts at given times by implementing jobs , The listener allowed the initialization of the service at server startup , the user were allowed to access routes to let their sensors harvested at certain times using restful routes , the quartz functionality is not yet complete and need some modifications. 4) Dependency Injection using Guice. The DI using guice was the most important part of the implementation to allow better testing and to inject all the dependencies , the listener was implemented and the Guice configurations was implemented to run at startup Challenges Tasks for the next week

The problem we get was to try to allow developers to use platforms like JQuery and other JS platforms , while trying to use platform like env.js , there were a lot of bugs and we couldn't install it properly so we did an HTTP utility class to be called by JS scripts , all of the previous tasks were tested using unit and integration tests. Challenges Tasks for the next weeks

In this weeks we worked on the following tasks 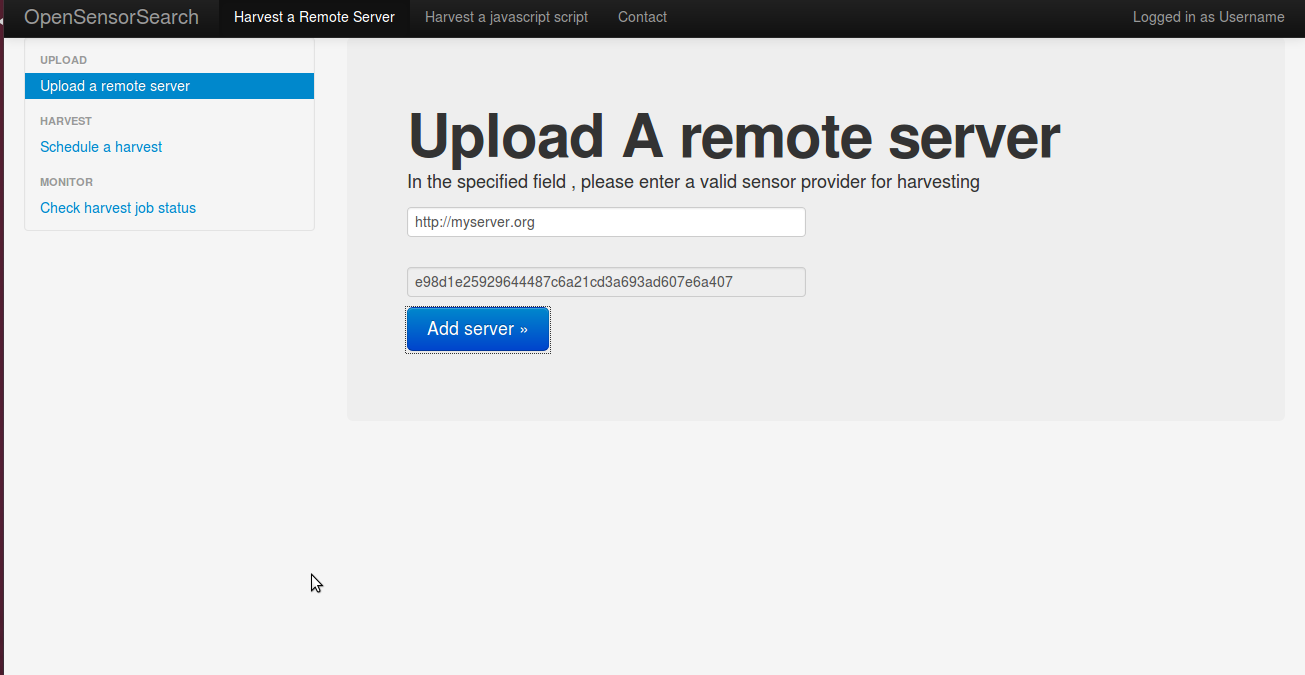 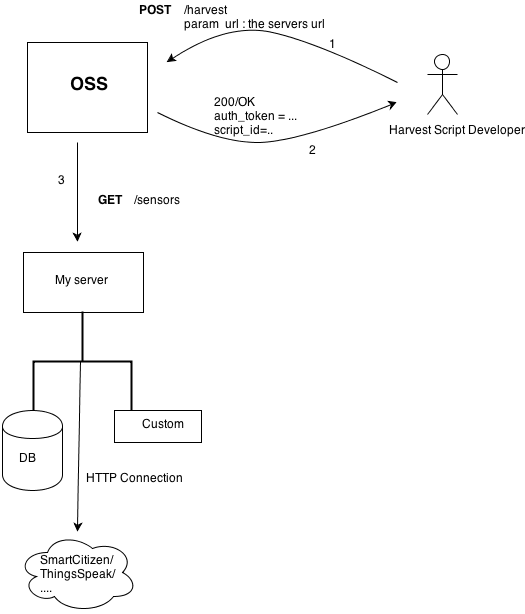 In that week we completed work on the OSS-UI for uploading both scripts and remote servers using Spring MVC , We implemented a complete authentication + permission level system , the following screens were implemented and tested

Fig - script uploaded msg Challenges Tasks for the next weeks

In this week we concentrated on the OSSUI , we implemented the license agreement checking and automatic license appending to the uploaded script

Fig - How the license agreement works in the OSSUI 2 - The User access DAO was enhanced to allow auth token authentication for all scripts , A user access resource was implemented and tested : The scenario works as follows 3 - The Harvest resources and the DAO was updated to allow the authentication schema mentioned in point #2 4 -Two public api methods were implemented

The autocomplete is a crucial part of the search engine , in OSS it suppors a Google-like autocomplete with many words related to different fields , the autocomplete needs to be very fast becuase it runs in realtime , We made a test using the Apache JMeter on a set of samples of 100 threads on a set of 1000 dummy sensors generated as in the previous section , the results were like the following

I'm Mohammad Ahmed Hamed Yakoub , I'm a Computer Engineering premasters student , I'm interested in software development in general , I mostly use java , I hope to implement the OpenSensorSearch Idea and make a successful and productive summer at GSOC2013 here at 52°North

Explanation: We want to take sensor data in the web to the next level by implementing the one stop shop for finding sensor data. This project fights this battle at two fronts: First, the existing 52°North Sensor Instance Registry (SIR) implementation must be made more open: Registered users should be able to request a harvesting of their data source as well as provide their own harvesting implementation to integrate their metadata into the catalog of sensors. The potential student would also implement such harvesting mechanisms for popular sites such as Cosm and Thingspeak.
Second, the database interface must be switched out to something that scales and is really (!) quick, such as Apache Lucene and/or commercial cloud storage. The infrastructure should be tested with a simple search form with a good auto-suggest search field - you could call it "Google for Sensor Data" :-).

The student should have some experience in Java and an interest to scrape data from the net and put it in a high performance data structure. Experiences with Apache Lucene, XML and Database indices as well as cloud infrastructures are great but not mandatory. The complexity of this project itself is quite scalable.

Community and Code License: Sensor Web, Apache 2.0 *I hope the development cycle goes like the following